Serving New Mexico Roofs For Over A Decade

This location serves the Metro Area and Central New Mexico. We have multiple crews on hand, allowing us to respond to client’s needs quickly and efficiently. Call today to schedule a free roof assessment and consultation.

As a locally-owned New Mexican company, RoofCARE is involved with the Albuquerque Community and are proud members of the Greater Albuquerque Chamber and NM Green Chamber of Commerce.

CITIES/AREAS SERVED FROM THIS LOCATION

Get a free roof assessment from RoofCARE!
Call us at 505-246-6960 or send us an email at info@roofcare.us and a representative will get back to you.

We Couldn’t Do It Alone

At RoofCARE, we believe in providing excellent customer service at every level.
Here are some of the individuals who make RoofCARE such an amazing place.

What Our Customers Say About Us

With over 100+ years of combined commercial roofing experience, our expert roofing team will work with you to find solutions to your roofing problems.

Can’t find the leak? Our production staff are experts at locating leak sources on residential and commercial roofs and making high-quality repairs that last.

You can’t manage what you don’t know. We can locate leaks and defects, determine what services, if any, are needed and provide a roofing inspection.

SmartCARE is a portfolio of services designed to proactively manage the life of roofing assets, saving building owners time, money, and stress.

This service provides a cost-effective, sustainable, long-term and comprehensive solution so you can avoid premature roof replacement.

Roof corrective repairs are done when unaddressed conditions become a problem. RoofCARE will fix existing defects and stop the spread of failed areas. 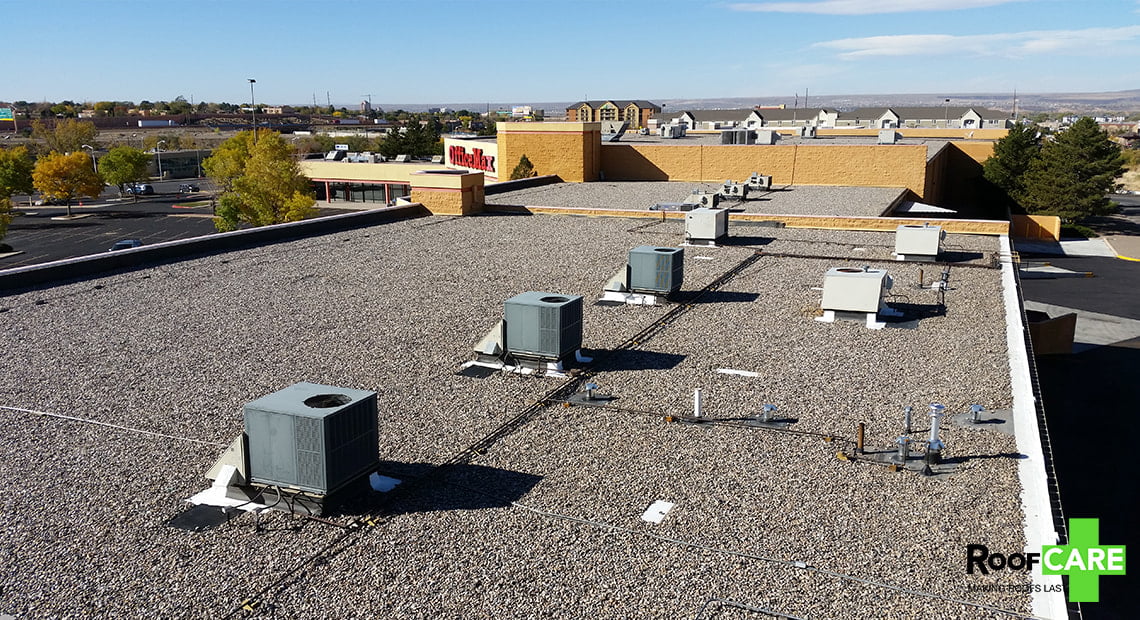 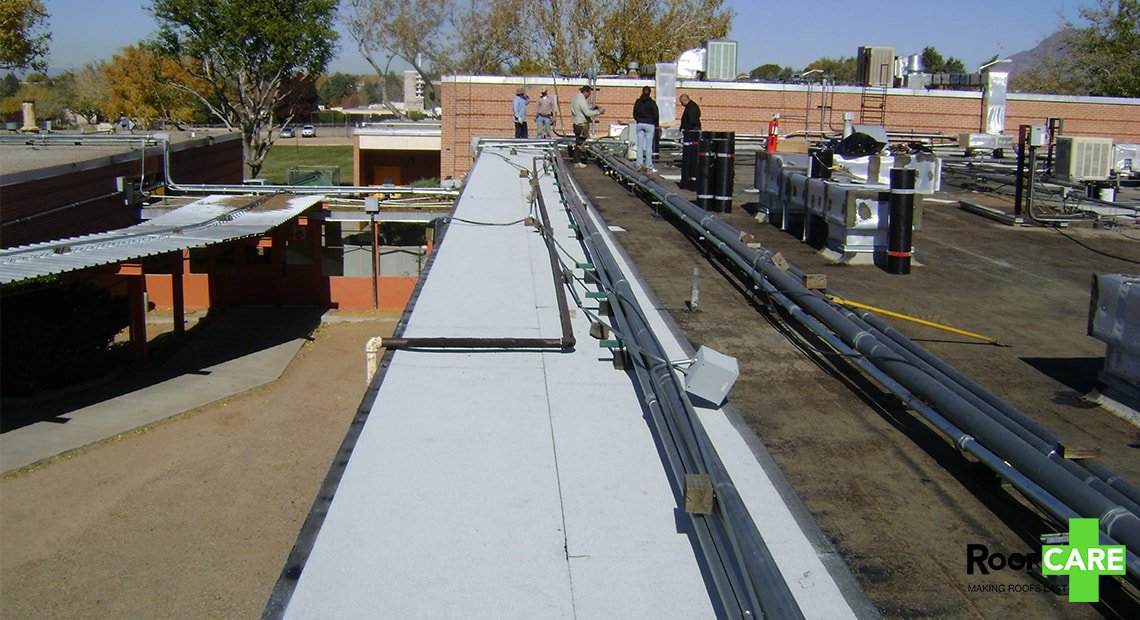 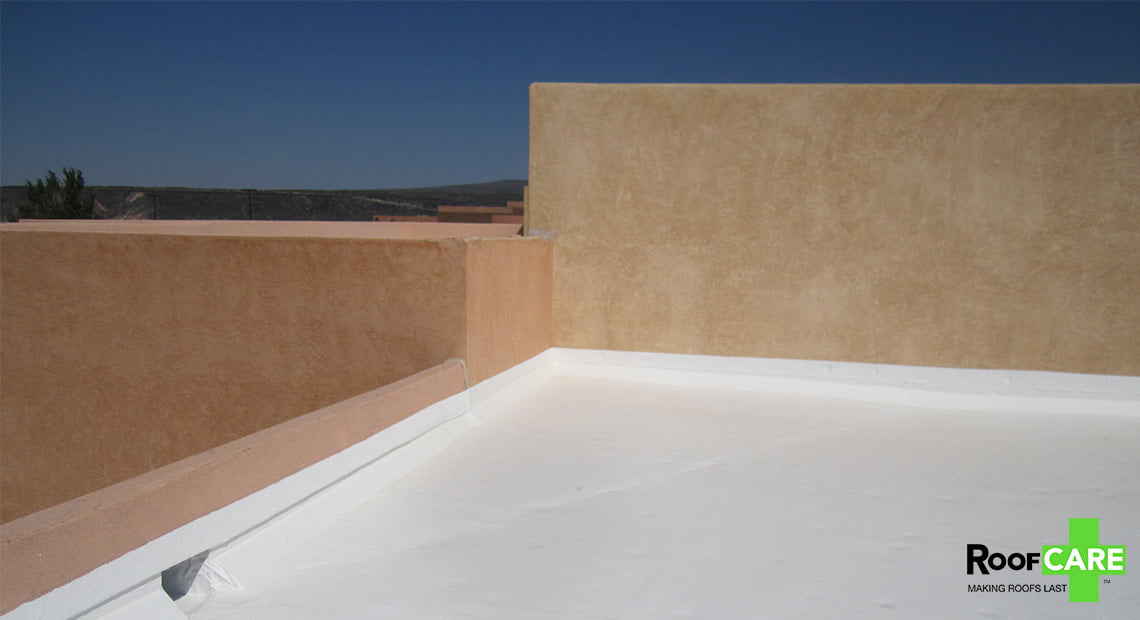 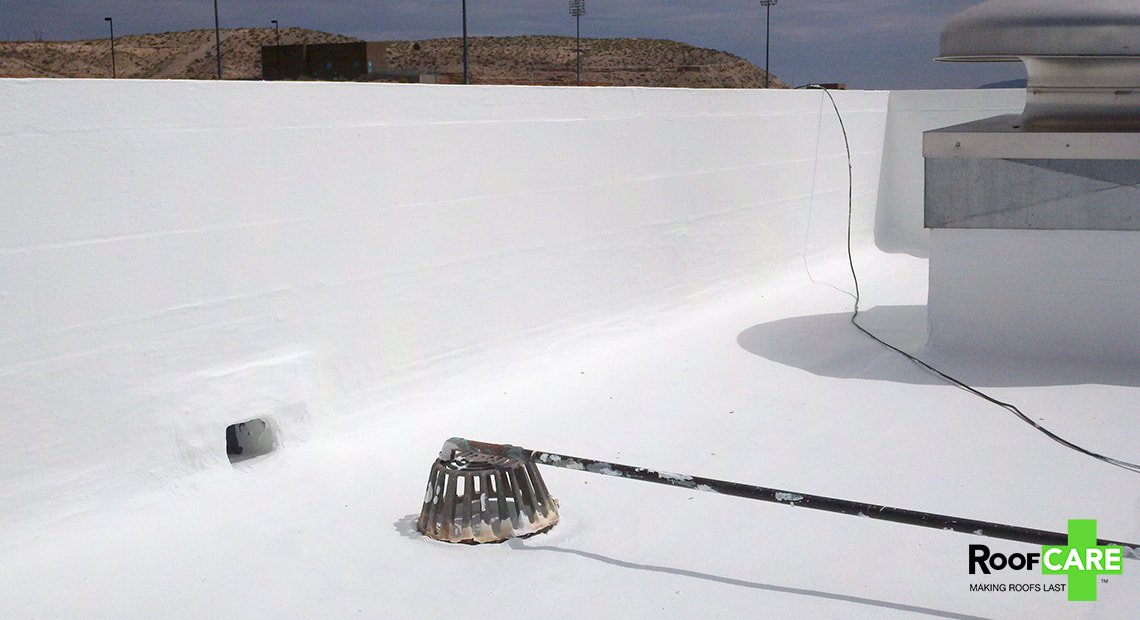 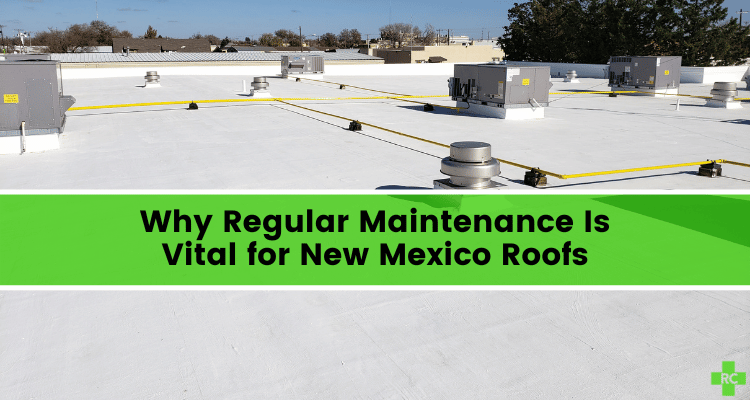 Why Regular Maintenance Is Vital for New Mexico Roofs

If you know anything about the weather in New Mexico, then you know why regular maintenance is vital for New Mexico roofs. In this southwestern state, the weather plays a big factor on commercial roofs. 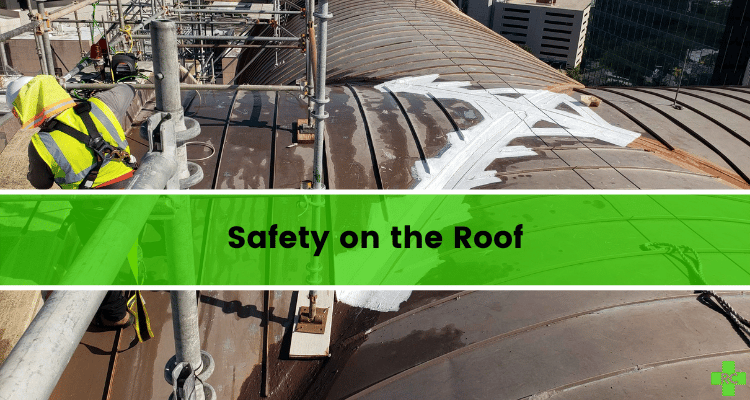 Safety on the Roof

Whether you need a professional roofing company for an inspection, ongoing maintenance, roof renovation, or a complete roof replacement, one of the least verified areas by clients is a company’s safety on the roof. Many 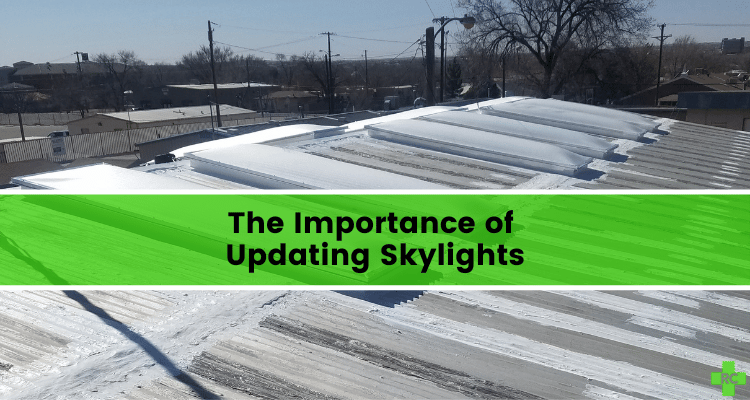 The Importance of Updating Skylights

Most building owners do not recognize the importance of updating skylights until it is too late, and often only after people’s safety has been compromised. Having someone on the roof come crashing through a skylight

Albuquerque, NM is one of the most sought-after cities in the state. It is the crown jewel of New Mexico and boasts the highest population of any other city in the state. It is a thriving and beautiful blend of diverse cultures, three hundred plus days of sunshine annually, and amazing outdoor activities. Whether you love the area’s iconic New Mexican cuisine or want to check out the hot air ballooning capital of the world or just want to immerse yourself in nature, Albuquerque has something for everyone.

This city is estimated by the United States Census Bureau to be roughly 190 square miles. Much of this land is home to scenic plains, plateaus, and mountains, with less than one percent of the city being water based. This one percent is primarily due to the presence of the world-renowned Rio Grande River, which flows through the city.

Albuquerque is at one of the highest elevations of U.S. cities with the airport sitting at just over 5,300 feet above sea level, although its southwesterly continental location largely minimizes some elevation effects.

Albuquerque has just over nine hundred thousand residents in its metropolitan area that are spread out amongst the city’s four main quadrants: Northeast, Northwest, Southeast, and Southwest.

The Northeast quadrant is comprised of several affluent neighborhoods that sit adjacent to the foothills of the Sandia Mountains. The Northwest quadrant of the city is more historical in nature but is also home to commercial districts and neighborhoods. The Southeast quadrant is largely technology based and parts of it are called the International District because of the migrant communities that make the area what it is today. The Southwest quadrant tends to be more rural and agricultural in nature than its counterparts.

The city of Albuquerque is thought to have Native American roots long before European explorers arrived in 1706 and named the city after a town in Spain. From that time forward, the town became a hotspot for trading and functioned as a military outpost.

Eventually the territory became part of the United States where it experienced the Civil War, the arrival of the Santa Fe Railroad, and the historic Route 66. Today it continues to be a quickly growing city that is popular as a tourist destination and home base for many Americans.

One of the most beautiful aspects of Albuquerque is its diversity, and this bleeds over into the food and attractions offered here. Residents and tourists alike can always find something fun to do in Albuquerque and its surrounding areas. Some of the most popular things to do include:

Albuquerque is known as the hot air ballooning capital of the world, so taking a ride in one of these colorful airborne rides is a must! These rides are offered year-round in good weather and provide phenomenal views of the city’s skyline and the surrounding areas.

This aerial tramway near Albuquerque is one of the longest in the Americas and offers stunning birds eye views of the natural wonders of New Mexico.

Taking in the Petroglyph National Monument

This is one of the largest sites of petroglyphs in North America. Visitors can take in ancient symbols and designs that Native Americans and Spanish settlers carved into the volcanic rocks, and learn more about what they mean and why they are there.

The historic part of town is often referred to as Old Town. Wander the streets of almost a dozen blocks of adobe buildings and then the charming town plaza. Be sure to stop and see the San Felipe de Neri Church which was built in 1793 by a Spanish colonial and is typically a crowd favorite for tourists.

The New Mexico Ice Wolves of the North American Hockey League are usually playing games from December to April. This Tier II junior ice hockey team is a local and statewide favorite, so be sure to catch a match up during their playing season.

Visiting the National Museum of Nuclear Science and History

This is an exciting stop for history buffs and those interested in learning more about the Atomic Age. Founded in 1969, the museum is one of the only congressionally chartered ones in the nuclear field and boasts a number of exhibits geared to educate adults and children alike.

This thirty-six-acre botanical garden in the city sits beside the Rio Grande River. It is home to a ten thousand square foot conservatory which features house plants native to many different areas of the world. Do not miss the plants of the North American deserts or the butterfly pavilion.

The facility is dedicated to the worldwide history of all things ballooning. It holds the largest annual balloon fiesta in the world. From weather labs to the history of ballooning, the museum can be fascinating for all ages.

The center is known as the Gateway to the 19 Pueblos of New Mexico. Here visitors can dine on Native American cuisine, see stunning murals painted by Pueblo artists, and shop for traditional and contemporary goods.

This stunning and widely traveled hiking trail near the city stretches roughly eight miles over a 3,700-plus foot rise in elevation. The hike is worth the climb when taking in the views of Albuquerque, Mount Taylor, and the Albuquerque Volcanoes.

Albuquerque is one of the southwest’s best kept secrets. Discover it for yourself whether it is via hot air ballooning, hiking, or learning more about historical landmarks and people. If you are ready for an unforgettable adventure, Albuquerque awaits!